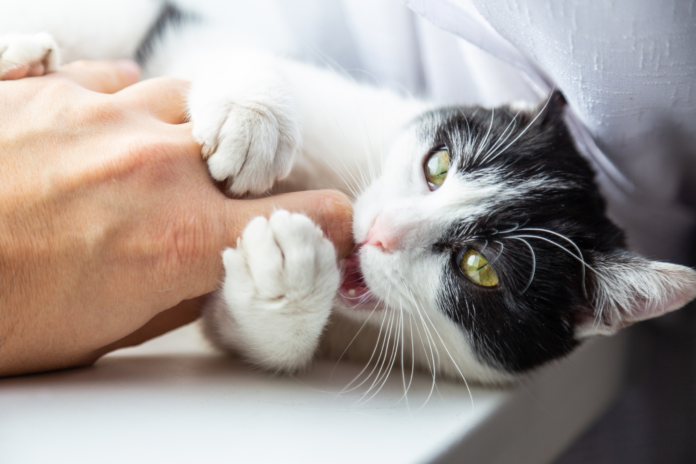 Have you ever had a cat bite your hand for no apparent reason? It can be scary, but there are many reasons why cats randomly bite in the first place. You may have heard that it’s because they’re frustrated or angry with you. While that is sometimes true, most of the time, it has nothing to do with how you’ve been treating them or anything else going on in their lives. In fact, most cat bites are simply a result of boredom or playfulness—or both!

Read on to get the answer to the question—Why do cats bite their owners?

One of the most common reasons why cats bite is boredom. Cats are very intelligent, and they need mental stimulation as well as physical activity. If your cat isn’t getting enough playtime or attention from you, she may become bored and frustrated. This is especially true for indoor cats that don’t have access to toys that simulate hunting (such as mice), which can be extremely frustrating for them!

Play is a natural behavior for cats that can be very important for their mental and physical health. According to the experts at Vetster, “Cats have a natural sense of challenge, play, and competition.” Cats are often excited or playful when they bite, so you should try to play with your cat as much as possible. This will help them release their energy in a healthy way instead of acting out by biting people or furniture.

Cats are curious creatures. They like to explore new things and play with them, which is why they might bite you when they try to get your attention or play with you. In addition, cats can also be jealous of other animals or people in their environment. They may even try to bite those individuals because they want more attention from the owner.

Cats are territorial animals, and they may use their mouths to mark their territory. When you are lying on the couch, a cat might approach you and bite your arm. The cat is not trying to hurt you; it is simply marking its spot as “territory” by leaving its scent in the air around you.

Another reason why your cat might bite you is if she’s in discomfort or pain. A common example of this is when a cat bites her paw due to an injury, but it can also be a toothache or some other ailment. If your cat has been acting strangely recently and you notice any strange behavior (such as excessive grooming), it could be that something’s hurting her, and she doesn’t know what else to do.

Cats are awesome pets, but not all of them are as friendly as you might think. If your cat starts acting out a little bit, it can be difficult to figure out why. Hope the above reasons helped you figure out the reason. If not, it’s recommended to consult a vet.